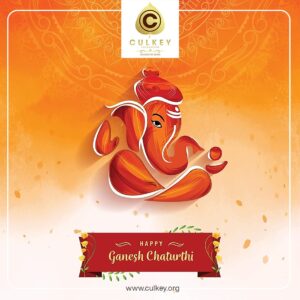 Ganesha Chaturthi (गणेश चतुर्थी), also known as Vinayaka Chaturthi is the Hindu festival of Ganesha, the elephant-headed son of Shiva and Parvati, who is believed to bestow his presence on earth for all his devotees in the duration of this festival. It is the birthday of Lord Ganesha who is widely worshipped as the god of wisdom, prosperity and good fortune.

Ganesha has many other titles and epithets, including Ganapati and Vigneshvara. The Hindu title of respect Shri is often added before his name. One popular way Ganesha is worshipped is by chanting a Ganesha Sahasranama, a litany of “a thousand names of Ganesha”. Each name in the sahasranama conveys a different meaning and symbolises a different aspect of Ganesha. At least two different versions of the Ganesha Sahasranama exist; one version is drawn from the Ganesha Purana, a Hindu scripture venerating Ganesha. 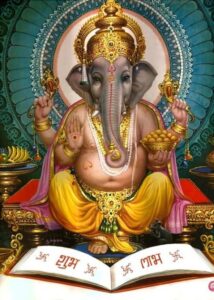 The name Ganesha the elephant-deity riding a mouse is a Sanskrit compound, joining the words gana meaning a group, multitude, or categorical system and isha, meaning lord or master. The word gaņa when associated with Ganesha is often taken to refer to the gaņas, a troop of semi-divine beings that form part of the retinue of Shiva

The Lord of Success

The son of Shiva and Parvati, Ganesha has an elephantine countenance with a curved trunk and big ears, and a huge pot-bellied body of a human being. He is the Lord of success and destroyer of evils and obstacles. He is also worshipped as the god of education, knowledge, wisdom and wealth. In fact, Ganesha is one of the five prime Hindu deities (Brahma, Vishnu, Shiva and Durga being the other four) whose idolatry is glorified as the panchayatna puja.

Significance of the Ganesha Form
Ganesha’s head symbolizes the Atman or the soul, which is the ultimate supreme reality of human existence, and his human body signifies Maya or the earthly existence of human beings. The elephant head denotes wisdom and its trunk represents Om, the sound symbol of cosmic reality. In his upper right hand Ganesha holds a goad, which helps him propel mankind forward on the eternal path and remove obstacles from the way. The noose in Ganesha’s left hand is a gentle implement to capture all difficulties.

The broken tusk that Ganesha holds like a pen in his lower right hand is a symbol of sacrifice, which he broke for writing the Mahabharata. The rosary in the other hand suggests that the pursuit of knowledge should be continuous. The laddoo (sweet) he holds in his trunk indicates that one must discover the sweetness of the Atman. His fan-like ears convey that he is all ears to our petition. The snake that runs round his waist represents energy in all forms. And he is humble enough to ride the lowest of creatures, a mouse. 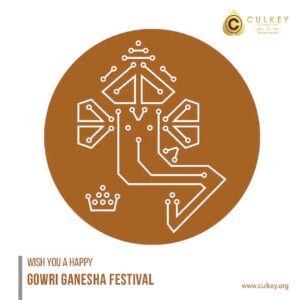 How Ganesha Got His Head
The story of the birth of this zoomorphic deity, as depicted in the Shiva Purana, goes like this: Once goddess Parvati, while bathing, created a boy out of the dirt of her body and assigned him the task of guarding the entrance to her bathroom. When Shiva, her husband returned, he was surprised to find a stranger denying him access, and struck off the boy’s head in rage. Parvati broke down in utter grief and to soothe her, Shiva sent out his squad (gana) to fetch the head of any sleeping being who was facing the north. The company found a sleeping elephant and brought back its severed head, which was then attached to the body of the boy. Shiva restored its life and made him the leader (pati) of his troops. Hence his name ‘Ganapati’. Shiva also bestowed a boon that people would worship him and invoke his name before undertaking any venture.

However, there’s another less popular story of his origin, found in the Brahma Vaivarta Purana: Shiva asked Parvati to observe the punyaka vrata for a year to appease Vishnu in order to have a son. When a son was born to her, all the gods and goddesses assembled to rejoice on its birth. Lord Shani, the son of Surya (Sun-God), was also present but he refused to look at the infant. Perturbed at this behaviour, Parvati asked him the reason, and Shani replied that his looking at baby would harm the newborn. However, on Parvati’s insistence when Shani eyed the baby, the child’s head was severed instantly. All the gods started to bemoan, whereupon Vishnu hurried to the bank of river Pushpabhadra and brought back the head of a young elephant, and joined it to the baby’s body, thus reviving it.

Ganesha, the Destroyer of Pride
Ganesha is also the destroyer of vanity, selfishness and pride. He is the personification of material universe in all its various magnificent manifestations. This reminds me of some Shlokas too:

Meaning: Lord Ganesha always dressed in white represents purity. He is omnipresent with grey complexion like that of ash glowing with spiritual splendour. The Lord with a bright countenance has four arms. I meditate on the God who can destroy all obstacles whether material or spiritual.

Meaning: Lord Ganesha has a curved trunk with a powerful body. He has the brilliance of a million suns. May the Lord, remove all the problems from the actions I aim to achieve.

Meaning: Obeisance to Lord Ganesha, the one tusked, huge-bodied, big-bellied, and large-eyed God, whose complexion is like that of molten gold. I surrender myself to such a great lord.

Meaning: The lord, for whom Lord Vishnu is the Uncle, whose mother is the divine auspicious one, Parvati and whose father is Lord Shiva. I offer salutations to Sri Ganesha, the Omkara.

Meaning: The Lord Sri Prasanna Vinaayaka, who lives in his Temple of Pearland; one who removes all obstacles of all his devotees at all times; one who has the Omkara face of the elephant. I pray to the divine Ganesha.