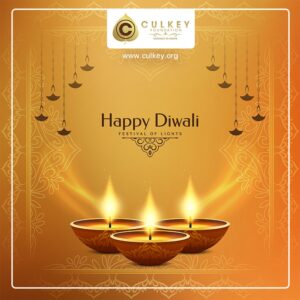 Deepavali is the Celebration of our growth through Knowledge, of light as a metaphor for hope and the removal of all that is negative.

Deepavali illustrates the supremacy of Good over evil.

Naraka Chaturdashi is celebrated a day before Amavasya & a day after the Dhanteras. It falls Chaturdashi of Ashvayuja Maasa in the Krishna Paksha (October or November).

Narakasura actually named Bhouma was the son of Bhoomi Devi and Vishnu, he grew to control a vast army, however he did not control his appetite for Power and wanted to possess all that at comes his way.

Narakasura was the ruler of Pragyotishapura. He defeated the Gods and imprisoned sixteen thousand daughters of the Gods and the sages. 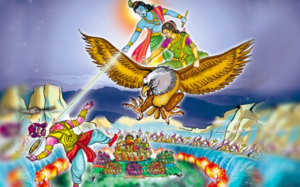 Unable to bear the tyranny of the demon, the celestial beings pleaded with Lord Krishna to save them from his torture. But Naraka had a boon that he would face death only at the hands of his mother Bhoomi Devi.

As they approached the palace of Narakasura they realized that it was protected by magic. There were many mystical barriers that Lord Krishna had to break before he entered the palace of Narakasura. since this was built with 7 agadthas, meaning 7 huge protection layers such as ‘Mountains, Poisonous gases, Water stream full of Crocodiles and Sharks, Fire, Cruel animals, ‘. Sri Krishna took his Garuda Vahana and easily flew over all these layers. As he stepped onto the empire, what seemed like beautiful platforms turned into 100 headed snake! Krishna fought with the snake and killed it. Then, Narakasura and Krishna’s fierce fight started and has been going on and on. Satyabhama got impatient watching the ongoing fight. She was wondering why Krishna, who as a little boy killed many such demons is taking long 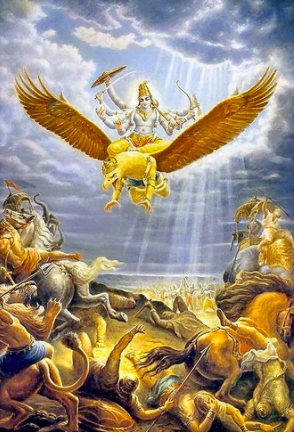 Narakasura came out to fight with Lord Krishna. The battle between Narakasura and Krishna shook the entire world.

During the battle, an arrow hits Krishna and he acted being unconscious. When Satyabhama saw this she took the place of Lord Krishna and she killed Narakasura.

This was because Narakasura had a boon that only mother Bhoomi Devi could kill him.

All the women who were taken captive by the cruel king were made free.

In memory of that fight and the great valour of Sri Krishna and his weapons, we enjoy the fire crackers.

Eg: The Chakra is lit to remember the way Krishna fought raising above the ground and twirling and twisting across each weapon launched by Narakasura

The Flowerpot on how he overcame the poisonous gases

Lord Krishna granted this boon and we are celebrating the end of Narakasura!

Let Deepavali mark The end of arrogance and greediness, the end of ‘poor qualities and atrocious behaviour, the beginning of joy and divine bliss with the power of Lord Krishna & Lakshmi blessing us.