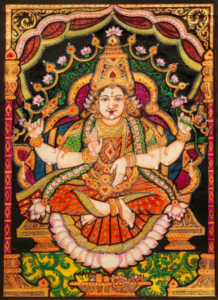 Varamahalakshmi Festival is a festival to propitiate the Goddess Lakshmi Varalakshmi is one who grants boons (“Vara”). It is an important pooja performed by many women in the states of Karnataka, Andhra Pradesh, Telangana, Tamil Nadu, Maharastra and Uttar Pradesh. The Hindu festival going by the name ‘Vara MahaLakshmi Vrata’ is celebrated on the Second Friday or the Friday before the day of the full moon in the month of Shravana, which corresponds to the Gregorian months of July–August.

Varamahalakshmi Vrata is performed by women for their own well being and that of all their family members. It is believed that worshipping the Goddess Varalakshmi on this day is equivalent to worshipping Ashtalakshmi – the eight goddesses of Wealth, Earth, Wisdom, Love, Fame, Peace, Contentment, and Strength. Due to the rising popularity of this holy day in some states, it is now being declared as an optional official holiday in India.

Eight forces or energies are recognised and they are known as Siri (Wealth), Bhu (Earth), Sarasvathi (Wisdom), Preethi (Love), Keerthi (Fame), Shanthi (Peace), Santhushti (contentment) and Pushti (Strength). Each one of these forces is called a ‘Lakshmi’ aka:

Vishnu is also called ‘Ashtalakshmi Pathi’ which is equivalent to saying that he is the consort for the eight Lakshmis or forces. In fact, Vishnu representing the preservative aspect of the universe, radiates these feminine energies of Lakshmi personified and worshipped as such since abstract force is beyond the comprehension of the ordinary people. As health, wealth and prosperity depend upon the rhythmic play of these forces, the worship of Lakshmi is said to obtain these three. This festival is observed largely by women, invoking the blessings of the goddess Lakshmi.

As the legend goes, this is a pooja that was performed by goddess Parvathi too to seek prosperity and happiness. Thus it came to be emulated by women who sought boons (vara) for the health, wealth and knowledge for the entire family. The prescribed day for the pooja is the Friday of the month of Shravana in the fortnight known as Shukla paksha, preceding the full moon day